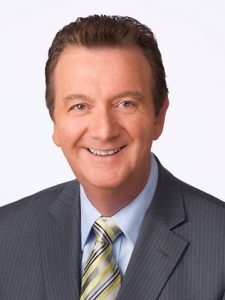 Graeme Goodings has been involved in the media all his working life. Over a long and varied career (more than 40 years), he’s worked for the Age in Melbourne, Radio 3AW in Melbourne, 7LA, 7EX and TNT 9 Launceston, 5DN, 5AA and NWS 9 in Adelaide, Channel 10 Adelaide then Channel 7. During his time at TNT 9 Launceston, he co-produced and co-hosted The Saturday Night Show which won a Logie for best live variety show in Tasmania.

In 2004, Graeme was diagnosed with cancer and stepped away from the news desk for eight months. One of the ways in which he dealt with the disease, and has helped others to deal with the disease as well. Since that diagnosis, life has changed for Graeme for the better. He’s happy to share his story of to talk about specific aspects of the media. As well as Graeme’s vast on-air experience, he’s also been a night club MC, TV variety, comedy writer/performer show host, voice coach and Media tutor. He is a Board member for Prostate SA and an Ambassador of the Adelaide Football Club.

Graeme Goodings is also an exceptional Master of Ceremonies and Forum facilitator.